OFFA and Sheridan College are excited to present the Fall 2020 Screening Series! One specially curated film, Code 8, featuring talented Sheridan Alumni will screen thismonth.  The film will be available to stream for 72 hours from the start date and 48 hours once the streaming begins. Single tickets are $8.99. The Happy Place and A Perfect Plan viewing has concluded. Moderated Live Q&As will be available following the screenings, including filmmakers, directors, and cast and crew. 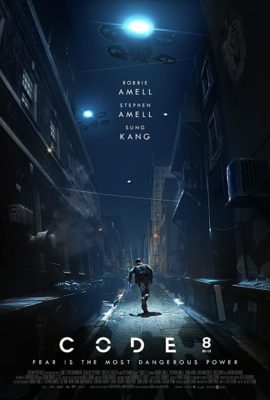 In the early 20th century, the public becomes aware of people with superhuman abilities, known as Powers, resulting in the government passing a law requiring all Powers to register their abilities. They quickly become a key component of the economy, notably in constructing Lincoln City as the “City of Tomorrow.” As the Second Industrial Revolution begins, Powers are marginalized in the face of increasing mechanization, leading to severe prejudice as they become second-class citizens. By the 1990s, a crime syndicate known as The Trust has flooded the streets with an addictive drug called Psyke, made from the spinal fluid of desperate or trafficked Powers. Police departments begin using advanced drones, named Guardians, and facial recognition software to combat Power-related crime while a city-wide Powers ban is debated.