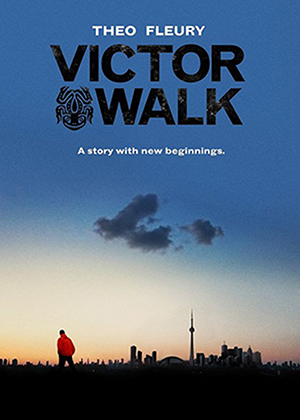 In Victor Walk, Theo Fleury’s Victor Walk, to bring awareness about child sexual abuse and help bring stronger laws against the abusers and create more help centers for survivors. The Victor Walk started in Toronto May 14th 2013. Theo with his victor walkers walked from Toronto to Ottawa in 10 days which is over 400Kilometers (250miles). See how many people come up to Theo and reveal their stories showing that the numbers don’t lie; 1 in 5 boys and 1 in 3 girls have been sexually abused before the age 18. Who is Theo Fleury? He won a Stanley cup in 1989 with the Calgary Flames, a gold medal with team Canada in 2002 and he was sexually abused by his coach in the early 80’s.

Q&A: A panel discussion will take place after the film moderated by bestselling author, sponsored elite endurance athlete, and international advocate for survivors of sexual violence Jean-Paul Bédard. The panel will feature Kim Charlebois (survivor and featured in the film), Walter Henry, who runs the Male Ally programme for Savis of halton. Rebecca Burrows, Supervisor of Counselling and Programs at SAVIS of Halton, and Jason Barr, Director, Client Services and Program Development from CMHA, Halton Region Branch.

Short film screened before this feature:

back to film schedule →